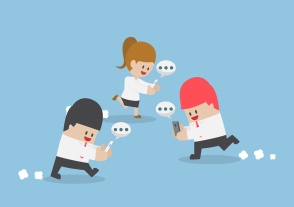 The large Internet players have become so ubiquitous that we take for granted their all-consuming power.

But cast your mind back a decade, to 2006. You were definitely using Google for search, but it’s less likely that you were on Facebook (until September of that year, it was exclusively a university network). Meanwhile, Amazon was the online store you automatically turned to for convenient book and CD purchases, but not much else. And to access all these sites you’d have done so on your desktop. The first iPhone hit the market in June 2007.

Basically, ten years ago we were still teetering on the precipice of the digital revolution. Now, we have gone over the edge, and we are hurtling through it. In those ten years, thousands of digital companies have sprung up. Some have cut through the noise but many have been superseded by something else (e.g. MySpace). Others have simply been swallowed up by giants. And it’s the change in fortune of these giants, the Large Internet Players (LIPs), that really illustrates the total industry transformation.

Ten years ago, the list of most valuable companies was dominated by big oil and multinational conglomerates. Last Friday, for a brief period of time, Apple, Alphabet (Google), Microsoft, Facebook and Amazon were the five most valuable publicly traded companies in the world, relegating ExxonMobile, the long-time leader in this category to a sixth place. The oil company has since clawed its way back into the Top 5, but the composition of the list clearly illustrates how important the digital economy has become over the past few years.

The LIPs have consolidated their powerbase and, with cash in their pockets, they will certainly continue to try and outflank the competition with new services, or just buy up competitors who stand in their way. But the dominance of these giants is not unassailable. In fact, the bigger and more powerful they get, the harder they have to work to retain that start-up agility and responsiveness that made them such a threat to begin with.

We live in the age of the upgrade and the generation raised on the Internet is the most fickle of brand champions. It loves something passionately, until it doesn’t. Then it moves on. Just look at Twitter.

This ten-year snapshot captures the dominance of digital. However, it also shows us how much can change in a decade. No one has the Internet ‘tied up’. Just remember that Google was the 28th search engine to be launched, it was its killer algorithm that saw it trounce its predecessors.

There are pockets of opportunity just waiting to be exploited. The digital age is about to get turbo charged with the onslaught of M2M and the Internet of Things, so who knows how the landscape will have changed by 2026, and what the world’s most valuable brands will look like.